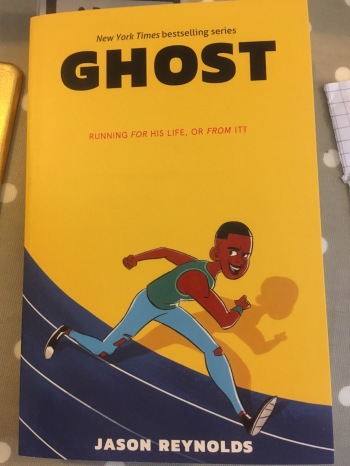 I had seen some Twitter love for this book and added it to my “want to read” list without any urgency to move it into pole position, but then it was selected as the #PrimarySchoolBookClub choice! What a great decision, as it made me rush out and get a copy.

Ghost, real name Castle Cranshaw, is a teenager who spends a lot of time alone and bored whilst his single mother works long hours at the hospital to support them. He is constantly in trouble at school, where he feels an outcast in his non-label clothes and outfits which are always too big as his mum needs to buy him things he won’t outgrow too quickly. He walks home from  school in slow-motion each day as the prospect of being alone in the apartment, with its harrowing memories is not an appealing prospect. The highlights of his journeys are the daily interaction with Mr Charles in the neighbourhood store where he stops to buy sunflower seeds to snack on, and watching people working out through the windows of the gym. One afternoon Ghost’s eye is caught by an athletics practice taking place on the running track at his local park… a coincidence that could change his life.

Ghost learnt to run the night his drunken father decided to shoot at him and his mother and has natural, raw talent which is spotted by “Coach” when, despite wearing jeans and badly fitting basketball boots he takes on the star sprinter! After that dash down the track Ghost becomes a member of a group for the first time in his life and knuckles down to the training regime imposed by Coach. He gradually learns to trust the other “newbies” Lu, Sunny and Patty and realises that everyone has their own issues to confront. However, membership of the team is based on trust, good behaviour and discipline at school … can Ghost fight the rage inside himself, keep out of trouble and earn himself a place in the Defenders Athletics squad?

Given it’s storyline, it comes as no surprise to find that this is a fast paced story, with short chapters which most readers will want to race  through as quickly as possible. But if you can pace yourself through the book you will be rewarded with a remarkable story of a young person finding out what is important in life. In the words of Coach, the story will:

“Show you that you can’t run away from who you are, but what you can do is run toward who you want to be.”

I loved this book. The author, Jason Reynolds, has conjured up a hugely sympathetic character for whom I found myself rooting from the opening chapter. Yes, he makes some mistakes in his behaviour, but he learns from the consequences and you fully understand the background issues which lead to that behaviour. The relationship between Ghost and the store owner Mr Charles is beautifully written, and the “father figure” roles played by both Mr Charles and Coach make you realise how important it is for adults to support the dreams of young people. Ghost’s love and respect for his mother is graphically highlighted when he begs Coach not to tell her about his big mistake. All of these themes are covered with the lightest of touches by Jason Reynolds, and are wrapped up in a thoroughly enjoyable story.

Although the book would be an easy read for anyone of 9 and above, it does touch on issues of gun violence, domestic abuse, poverty and even a reference to drugs, so I would advise younger readers to read it alongside an adult with whom they can discuss these issues. The publishers, Knights Of should be congratulated for their mission to publish books that appeal to every kind of reader, and I am very much looking forward to reading the next in the “Run” series by Jason Reynolds. Finally I must mention the glorious cover art by Selom Sunu which only adds to the appeal of this winner of a book.

If you loved this, why not try Holes by Louis Sachar next?

I love books! I set up and ran a primary school library for a few years before moving to an NHS library as a clinical outreach librarian. My personal view is that encouraging all children to find a love of books is key to their future well-being. Currently studying for a post-graduate qualification in Library and Information Management, part-time with the University of Ulster. View all posts by veronicaprice2163

One thought on “Review: Ghost by Jason Reynolds”