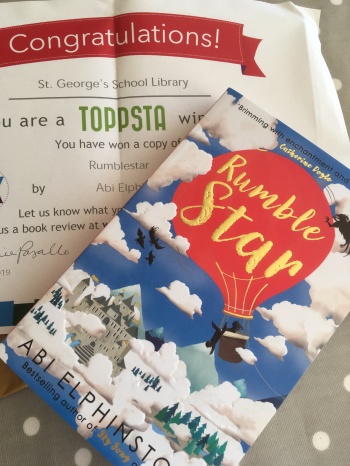 You can judge a book by its cover! The dazzling cover illustration by Carrie May, with its title picked out in gold, reflects the brilliance of this author’s imagination, as once again we are invited into an alternative reality created by Abi Elphinstone.

From the opening lines of the prologue I was gripped by the magnificent story-telling. Firstly a quick re-capping of the events of “Everdark” and then into the Rumblestar adventure where we are introduced to timid, bullied Casper Tock, who gets through life relying on timetables and “to do” lists. He has become expert in hiding from the entitled bullies at his boarding school, but slipping inside the case of a grandfather clock one afternoon causes an “ Extremely Unpredictable Event” to occur!

He finds himself arrested by a small, impulsive girl called Utterly Thankless and taken to Rumblestar where the “marvels” containing all the wondrous ingredients required to write the weather scrolls for The Faraway (earth) are being destroyed by dark forces. When Utterly realises that she has mistakenly identified Casper as the criminal, the two of them have to escape the castle accompanied only by Arlo, a miniature dragon, in order to save Rumblestar from the “Midnights” controlled by Morg the Harpy. Their epic adventure leads to encounters with cloud giants, drizzle hags, snow trolls and storm ogres as they seek to destroy the sinister Midnights who are threatening the very existence of Rumblestar and all the Unmapped Kingdoms and consequently The Faraway.

As their quest unfolds these two hugely appealing protagonists have to overcome their deepest fears and exhibit inner reserves of bravery and selflessness, aided by some of the magical creatures they encounter. The change in their characters seems entirely organic and believable as their friendship develops.

This is honestly my “Book of the Year” so far and I can’t wait to put it into the hands of our many Abi Elphinstone fans in the school library! Her ability to conjure imaginative worlds, populated by incredible, but simultaneously believable, characters knows no bounds. You can guarantee that reading this book will bring hours of pleasure, and cause you to reflect on the true meaning of wealth, the destructive nature of greed and the hope that is conjured when people behave courageously.

A must-read for everyone over 10 years-old!.

With thanks to Toppsta.com  who provided me with a copy of this book in exchange for an honest review.

I love books! I run a small primary school library on a part-time basis. Currently studying for a post-graduate qualification in Library and Information Management, part-time with the University of Ulster. View all posts by veronicaprice2163